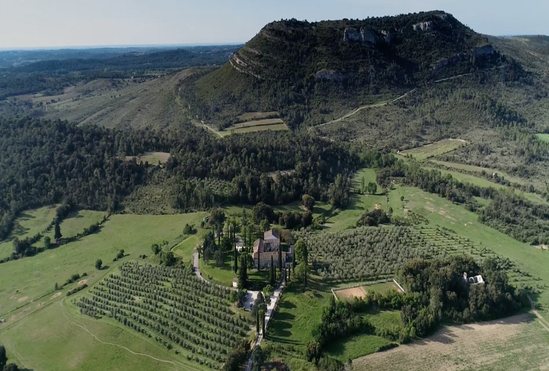 At the heart of the St Germain estate stands the old stone chapel and Mas. For most of the last thousand years, St Germain has belonged to the Baron of Montlaur’s estate. In the twelfth century, a chapel was erected on the foundations of an ancient Roman villa. The estate was gifted to the church in 1233 and became home to an Augustine convent (St Germain de Fournès) with its cloisters built around the chapel. When the convent closed in 1435 the last Prioress Jeanne de Montlaur sold the property back to her brother, Hector, Baron de Montlaur. Since then, the estate has seen numerous activities from sheep farming, olive, lavender and wine growing to silkworm breeding. The estate’s ancient mulberry trees date back to shortly after the French Revolution, when the property was a centre for silkworm production.

The estate sits within a European Natura 2000 zone, created to protect the pair of rare Bonelli’s eagles that nest on nearby cliffs. With only 26 couples remaining it is one of France’s rarest birds. At over 30 years old the female Eléonore, the oldest Bonelli in France, is now with her third mate. Around 330 species of plant grow on the estate. The air is thick with the typical Provençal scent of wild rosemary and thyme.

St Germain enjoys a privileged position close to Provence, the Camargue, the Cevennes, in the heart of the wine making country of the Languedoc.

As you stand in the valley, the low garrigue punctuated by vineyards and olive groves, overlooked by Pic St Loup and the cliffs of Hortus opposite, it is hard to believe that you are within easy reach of most major European cities.The airports and TGV stations of Montpellier and Nîmes are within a half hour drive.

The surrounding region has a long rich heritage and is littered with prehistoric sites, ancient Roman remains, ruined castles, medieval villages and fortified towns. Explore the colourful market of nearby Sommières, or visit the fortified town of Aigues Mortes, the beautifully restored medieval village of St-Guilhem-le-Désert, the arts and craft studios and antique shops of Pézénas and Uzès, or the cultural centres of Montpellier and Nîmes.